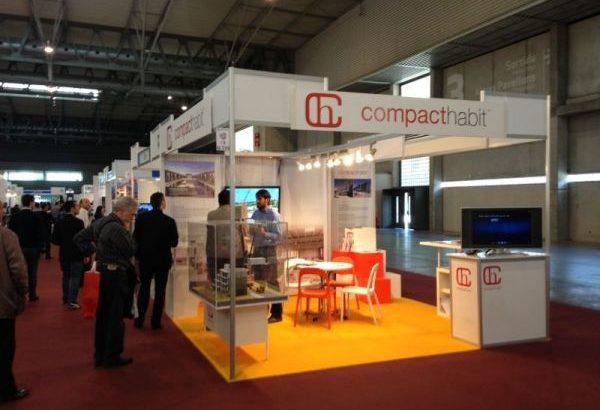 The total industrialized modular building system (eMii for its acronym in Spanish) by Compact Habit, which received a prize six years ago at Construmat for its innovative proposal, got an honourable mention in the building awards at Construmat 2013 for the ETSAV student residence halls. This building has garnered several recognitions, both in Spain and internationally. For example, the Greenbuilding prize awarded by the European Commission to developers of new building construction that are noteworthy for their low environmental impact, energy efficiency and technological innovation.

This company that received an honourable mention for building also had the opportunity to explain about the buildings and equipment constructed by Compact Habit in recent years in Catalonia, which includes the student residences in Girona, Sant Cugat and Manresa. Altogether, a total of 84 important projects built throughout Spain were eligible for the award and the five honourable mentions.

Six years ago Compact Habit, which has its headquarters in Cardona (Bages), received the innovation award at Construmat in an edition that served as an official presentation of the firm, the result of an initiative by Constructora d’Aro. This period served to validate the business project and also to certify the virtues of the eMii system. The eMii system has been very highly rated for its energy efficiency and shortened works completion deadlines, among other aspects. The construction system was presented last Wednesday at the Construmat Innovation Center, along with other highly technically advanced proposals.