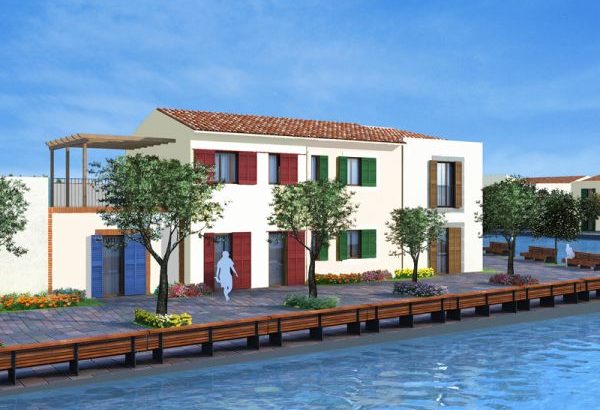 Each house has one to three bedrooms and is set in a typical Mediterranean village setting.

The Camping Resort Cambrils Park, that offers luxury family tourism services on the Costa Dorada has ordered the manufacture of 326 modules by CompactHabit that will comprise 170 Mediterranean houses with one to three bedrooms with the patented industrialised integral modular building system (eMii) which allows the manufacture of homes on a production line, as if they were cars.

This order is the first from the private sector awarded to CompactHabit, which began assembly-line production two years ago with the construction of facilities for the public health sector in Reus. Since then they have executed a building of dwellings for young people in Banyoles (Incasòl), three student residences in Girona (University of Girona), Sant Cugat (Catalonia Polytechnic University) and Manresa (City Council of Manresa), and various hospital consulting rooms for the Josep Trueta Hospital in Girona (Catalan Health Service).

The area of Mediterranean houses is part of the fourth phase of expansion of this resort, which was initially built in 1996, and with five stars, applies a new concept with themed areas of wooden bungalows like in the Caribbean Islands or Polynesia, that already are in service. Now it is the Mediterranean’s turn, which is a step forward in terms of quality and comfort thanks to the exceptional construction system. As a result of this order Compact Habit has increased the industrialisation process with a second daily shift and has created approximately 50 new jobs.

The new area will be developed using the typical parameters of a Mediterranean village, with a sea front, gardens, public squares, etc. The colours of the houses and the finishings will be in keeping with the corresponding aesthetics. The modules that make up this village will leave the CompactHabit plant fully finished and equipped (fitted wardrobes, kitchen, bathroom, etc.) and with the qualities the developer, Cambrils Park, has requested to provide their customers a superior level of comfort.