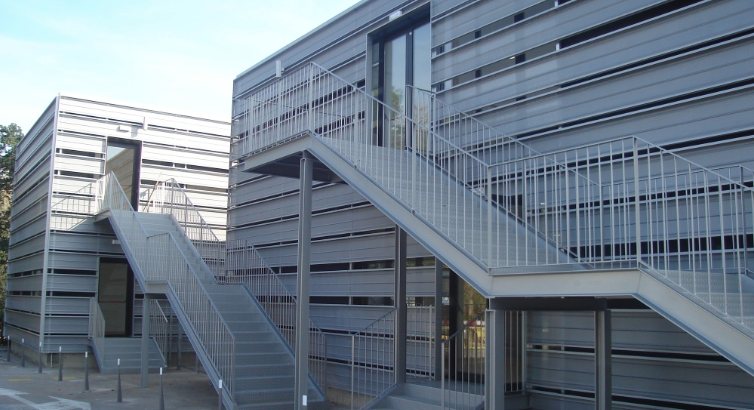 Compact Habit, a Catalonian company that has patented an innovative construction system, built 89 new clinics for the Health Department of the Generalitat (Autonomous Government of Catalonia) at the Josep Trueta Hospital in Girona. Recently, government and construction company representatives have confirmed the advantages of this new system, which has let them stack and fit the modules forming two floors of outpatient clinics in just a few days. It is expected that these works will be finished in the record time of three and a half months. These spaces can be reused as primary care centres once their provisional function has concluded.

The outpatient clinics project was awarded to Constructora d’Aro – founder of Compact Habit and majority shareholder – for 3.5 million Euros through a design contest held by Catalan Health Services. The project is by architects Jorge Batesteza and Silvia Barberá from BBATS Consulting & Projects.

The new building was constructed with two floors and a total surface area of 3,202 square meters, which shall accommodate 89 clinics, 15 of which shall be for oncology. The modules make up the consulting rooms, access corridors and waiting rooms as well as other common spaces.

In accordance with the project awarded by public tender through the Health Department and the Generalitat there are two types of modules. The individual module; 25.4 squared meters which holds the consulting room, corridor space and waiting room that is connected to adjacent modules, and the double module; 51,17 squared meters, which holds two consulting rooms and a central space that serves as corridor and waiting room.